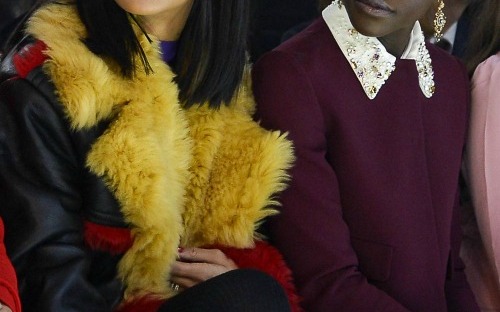 It all started with a picture, then the reaction.

A picture for the history books pic.twitter.com/OgxAGZMn4Z

I didn’t know I wanted this. pic.twitter.com/Y20iCOwELR

A common thought is there should be a movie starting these two.

Rihanna looks like she scams rich white men and lupita is the computer smart best friend that helps plan the scans https://t.co/PhWs1xd3nj

This topic and tweet itself went viral. Fans of both were raving about the possibilities of a collaboration. Then Lupita herself actually responded to these creatives with an offer to team up with the Bad Girl from Barbados.

I’m down if you are @rihanna https://t.co/vwHBWeCbFZ

I myself got caught up in the fury and offered that Xavier Burgin, most known for his XLNB Stories like Tina & the Gucci Flip-Flop would be attached to write the screenplay while Ava DuVernay directs.

Apparently God heard my cries and inspired by 1800SADGAL’s tweet X ended up writing ‘Dusk In California: A Film’ based on this concept.

Something that began as just a thought, an observation began so much more as many from Switzerland to the States were supporting ideas and discussing concepts complete with fan art.

This incident reminds me of the creatively of Black people, from trending and creating hashtags to the concept of live reactions on social media we are at the center of culture and content.

Now it’s up to Hollywood to take the next step or see if an investor will step up and fund it.

UPDATE: Codeblack Films/Lionsgate has responded to the call

@Lupita_Nyongo @rihanna Lionsgate is ready! Are you guys serious? If so a deal can be done this week!