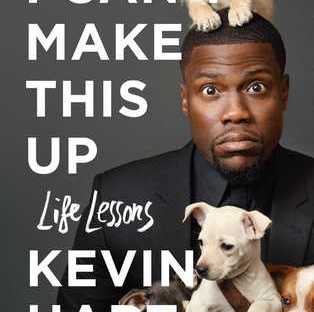 Kevin Hart is an example of mastering the pivot.

There are choices made within life that results in how your life is played out.

He took these results and instead of accepting his lot in life decided to make the best out of any situation.

In his book, I Can’t Make This Up, Kevin speaks on a myriad of topics from persistence to acceptance.

His framing device of separating the sections into life lessons makes the 99 chapters of his book not seem as intimidating.

Unlike other personalities his radical honesty is refreshing, sometimes with a memoir consumers are attracted to the prospects of salacious stories primed with rumors and tales of working with giants of their field but with Hart’s book he focuses on how his experiences and how he grew up affected him.

Just like with his comedy he shows exactly what made him this way from a hardworking and faith filled mother to a drug addicted father his identity was shaped by his surrounding.

There are so many jewels in this book and the epilogue where he explains his blueprint on life he consolidates the topics and what’s important to him in eight different qualities.

Dash is an entrepreneur who was a leader in film, clothing and music through his businesses from Rocawear to Rocafella with icon JAY-Z.

Dash, though comparatively has fallen in harder times, is a great judge of talent from discovering Empire’s Lee Daniels to empowering Kanye West and in the early 2000s he gave Kevin Hart his first film role with Paper Soldiers.

In the book Hart explains how this small film lead to bigger opportunities like eventually connecting with producer Judd Apatow.

I was surprised Hart talked in such detail about his tumultuous relationship with his first wife Torrei.

Though I disagree with his belief that being separated is not the same as being married his writing especially in the later chapters when he’s discovering sobriety he speaks on not just the fights they’ve had but his role in provoking an unhealthy environment.

Lastly my takeaway from this book is his work ethic.

Starting from dashed dreams of making the league as a basketball player to missing out on college because of his SAT scores his stories of having to realize his mistakes of not taking school seriously then continuing to push on.

The reason I call him one of the masters of the pivot is his nonchalant but humble attitude leads to accepting where he is then working even harder to surpass others expectations.

His growth from working up the ranks as a shoe salesman for City Sports to sacrificing and studying his craft every night at various comedy clubs.